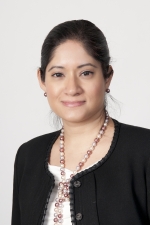 Dr Anita Asgar is an Interventional Cardiologist working at the Institut de Cardiologie de Montreal since 2009. Originally from Newfoundland, Dr. Asgar completed her medical school and Internal Medicine Residency at Memorial University (1995-2002). She then moved to Dalhousie to pursue her cardiology training in 2002. Following a two year fellowship in Interventional Cardiology at the Institut de Cardiologie de Montreal, she moved across the Atlantic to London, England to complete a fellowship in Structural and Congenital Intervention at the Royal Brompton Hospital as well as a fellowship in Cardiac Magnetic Resonance Imaging.

Recently named as one of the Young Leaders in Interventional Cardiology by the CRT in February 2010, she is a full-time staff Cardiologist at the Institut de Cardiologie de Montreal as well as Director of the Transcatheter Valve Therapy Clinic. She is an active member of the Structural Heart Intervention program performing over 70 transcatheter aortic valve replacements per year, as well as numerous congenital interventions. She recently began the first Transcatheter mitral valve leaflet repair program in Quebec in December 2010 and is the leading physician in Canada with this therapy. Her research interests include the treatment and management of valvular heart disease and cost-effectiveness analysis.