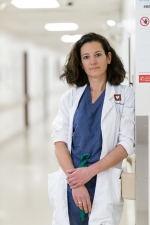 Dr. Rivard obtained her medical degree in 1993 from the University of Lariboisière in Paris. She then completed a specialist certificate in cardiology in France in 1999 and in Canada in 2009. Dr. Rivard completed her three years of training in research and clinical electrophysiology at the Montreal Heart Institute and practiced as a clinical electrophysiologist at the Center Universitaire de Lyon, France from 2006 to 2008.

In 2009, Dr. Rivard completed a sub-specialization in electrophysiology in the field of catheter ablation of atrial fibrillation and ventricular tachycardia at the University of Bordeaux, in the department of Professor Michel Haïssaguerre. Dr. Rivard was then hired by the electrophysiology service of the Montreal Heart Institute in 2010.

Dr. Rivard is involved in a number of clinical trials in the field of atrial fibrillation and ventricular tachycardia as principal investigator and/or member of the steering committee. She holds several research grants, notably from the Canadian Institutes of Health Research and the Heart and Stroke Foundation, and has obtained support from C-SPIN and the FRSQ.

Dr. Rivard is currently the principal investigator of the BRAIN-AF trial (brain-af.ca) studying low-dose anticoagulation in patients with atrial fibrillation and low risk of stroke.