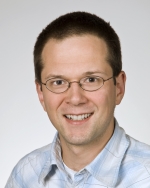 Simon de Denus' research interests are mainly in the fields of cardiovascular pharmacotherapy and personalized pharmacotherapy. He has published over 50 articles and book chapters as well as close to 40 abstracts.