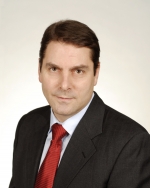 Dr. Deschamps has been an associate professor in the Department of Anesthesiology at Université de Montréal since 2006. An active member in the Department of Anesthesiology at the Montreal Heart Institute (MHI), Dr. Deschamps has also served as Director of the Anesthesia Research Group at the MHI since 2010.  His doctoral thesis on the role of the autonomic nervous system on the control of venous return and cardiac output earned him a Governor General’s Academic Medal (Gold) from McGill University. After graduating with a medical degree from Université de Montréal in 1996, he received <p >specialty certification in anesthesiology from McGill University in 2001. A Research Scholar of the Fonds de Recherche du Québec – Santé since 2003, he has written many scientific publications and book chapters on the role of the autonomic nervous system and cerebral and multisystem protection during heart surgery.