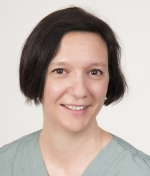 Dr.Blandine Mondésert is a French cardiologist who graduated from Université de Grenoble in 2008. She worked two years as the chief of the clinic of arythmia at the CHU of Grenoble in France. She has also been admitted as a cardiologist by the Collège des Médecins du Québec in July 2013 through the France-Quebec agreements.

Then, she did a fellowship in electrophysiology at the Montreal Heart Institute from 2011 to 2013, where she get specialized in electrophysiology fields (stimulation and ablation) particularly in adult patients with congenital heart diseases within Dr. Paul Khairy’s team. She also develops an expertise in the extraction of implantable cardiac material for which she completed her training in extraction at the Centre Hospitalier Universitaire de Lille, France, in 2014.

In July 2014, Dr. Blandine Mondésert joined the Montreal Heart Institute team where she works as a cardiologist. She also acts as clinical assistant professor in medicine at Université de Montréal.